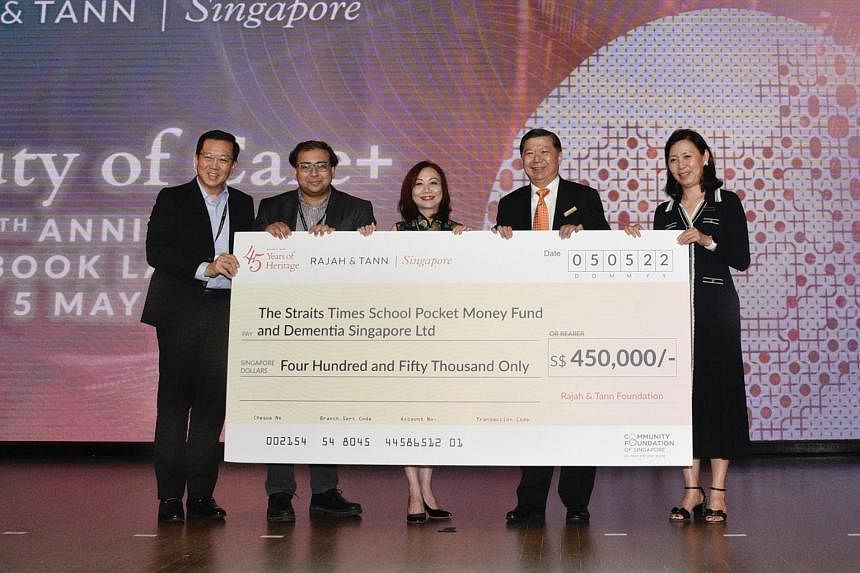 The donation was part of the firm's 45th anniversary celebration on Thursday (May 5) at the Ritz-Carlton, Millenia Singapore, where it also gave $225,000 to charity Dementia Singapore.

Mr Ang said: "The spirit of caring and giving back to society is part of R&T's DNA, which we inherited from our founders T. T. Rajah and Tann Wee Tiong."

A commemorative book about Rajah & Tann titled Duty of Care+ was also unveiled during the celebration on Thursday.

Written by former ST senior writer Cheong Suk-Wai, the book traces the law firm's growth from its beginnings as a two-man partnership to the regional firm it is today.

"The Rajah & Tann story is essentially about how a group of talented lawyers came together to build a top-rated indigenous Singapore law firm, while holding fast to the principle of excellence with heart in the way they practised law and cared for others," said Mr Ang.

"This donation will help us continue our work in providing thousands of students from low-income families with school pocket money for meals and other schooling needs," she added.

The STSPMF was started in 2000 as a community project by ST to help children from low-income families.

It has given out nearly $90 million to date and has helped more than 200,000 beneficiaries.