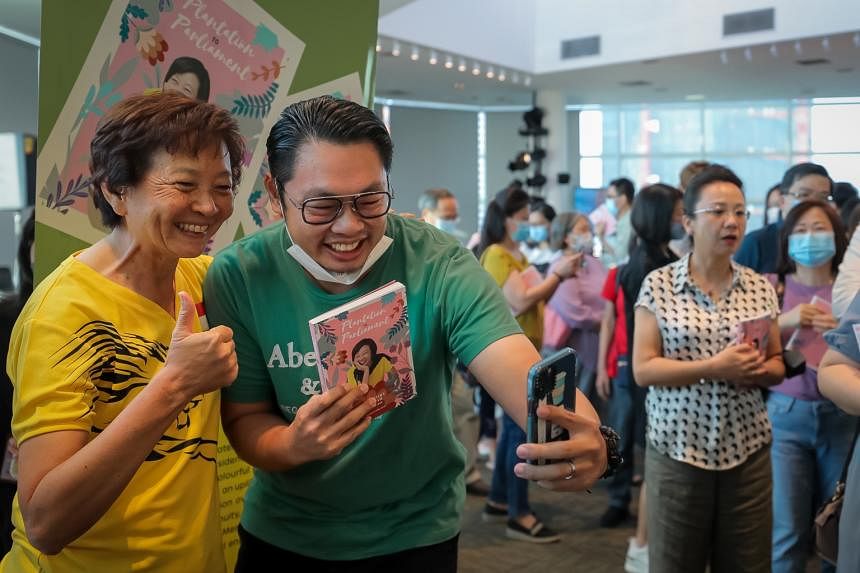 Dr Lee Bee Wah taking pictures with guests at the launch of her biography at the National Library, on Jun 4, 2022. ST PHOTO: GAVIN FOO

The book, Plantation To Parliament: My Story So Far, was launched at the National Library on Saturday (June 4) in conjunction with the Singapore Book Fair.

Ms Lee, affectionately known as Hua Jie or Sister Flower after the last character of her Chinese name, said in Mandarin at the event that being interviewed by former Lianhe Zaobao journalist Hong Weixi for the book made her laugh and cry several times.

Ms Hong, who wrote both the English and Chinese versions of the book, said: "I remember that the first time she started crying was when she talked about her father - she cried because he cannot see her accomplishments today and it brought me to tears too."

During her 14 years as an MP, she brought up issues such as litterbugs, second-hand cigarette smoke and pigeon woes, and fought for better services and amenities for residents. Prime Minister Lee Hsien Loong, in the book's foreword, said that as an MP, Ms Lee was a ball of fire, indefatigable and resourceful.

The 61-year-old, who started her working life as a civil engineer, said that before her retirement in 2020, every night as an MP was spent on the streets of her Nee Soon South ward or at Meet-the-People sessions, adding that weekends were especially busy because she wanted every area to have events.

At one gathering with her residents, she learnt that veteran Hong Kong actor Benz Hui lived in her constituency after meeting him when a resident invited her over for char kway teow.

"At the time, a lot of people said strange things happen in Yishun so I immediately posted a photo on my Facebook page to show that even a famous Hong Kong star has come to Nee Soon South," she said.

Fast forward about three years and the pair are still friends, with the actor attending the launch on Saturday as a speaker.

It was almost full house at the launch, with all 120 tickets for the event snapped up within a day of Ms Lee sharing it on her Facebook page on May 19.

The STSPMF, which began in 2000, supports 10,000 students from low-income families annually.