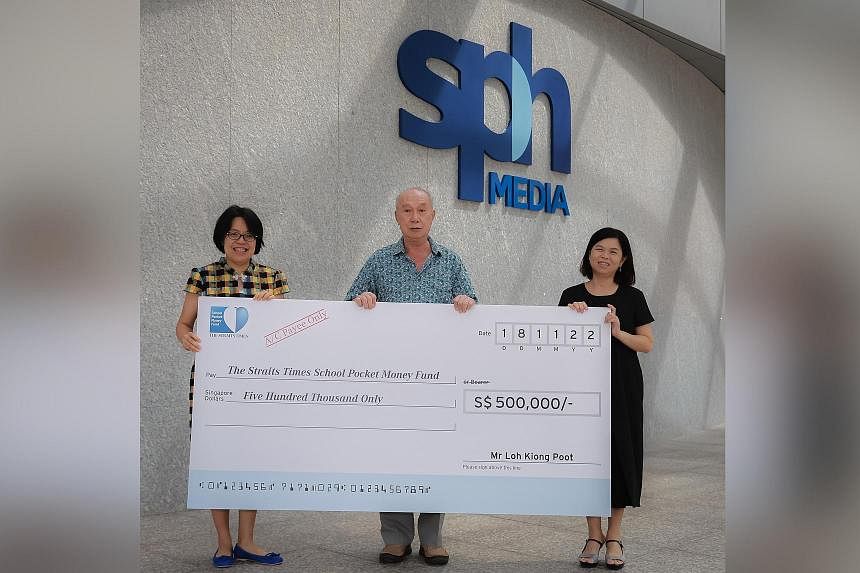 Retired businessman Loh Kiong Poot has contributed $2.5 million to the fund over the past five years. ST PHOTO: GAVIN FOO

Since 2018, he has donated the same amount to the fund every year, contributing a total of $2.5 million.

The 78-year-old said: “If you have excess money, why would you keep holding on to it? If you can donate and help people, just donate. That’s my principle.”

The self-made businessman, who said in 2019 that he hoped to make the donation a yearly affair, presented a cheque to STSPMF chairman Lee Su Shyan and general manager Tan Bee Heong at the SPH News Centre on Friday.

Ms Lee said: “We are very appreciative of Mr Loh’s generosity towards the various charities. His donation to the ST Pocket Money Fund will go a long way towards supporting our beneficiaries.”

He decided to increase his yearly donation to $3 million in 2022 after selling his landed property in Telok Kurau to live in a condominium in Bishan in October and having the extra money to give.

“I have already reached an old age, money to me is not important, so whatever excess I have, I will donate,” said the retiree, whose son and two daughters are married with their own children.

He hopes his act can inspire others to donate as well.

“As a Hakka, I hope the new generation of Hakkas will be generous to donate money,” he said.

Mr Loh has never forgotten his own struggles to make ends meet when he was young.

When he was 14, he quit school and ran away from home. He worked odd jobs, sometimes as a shop assistant at grocery stores and bookshops, living on around $20 a month. His nights were spent in a small shophouse owned by one of his employers.

Mr Loh went into the trading industry in 1974 and built up his business until his retirement in 1990 at the age of 47.

Since 1991, he has been donating to charities, orphanages and temples in Cambodia, Thailand and Vietnam.

Initiated by The Straits Times in 2000, STSPMF provides pocket money to children from low-income families. The fund has disbursed more than $90 million to more than 200,000 children since then.

Every year, the fund supports 10,000 children and youth from families whose per capita gross monthly household income is less than $690.

Around $7.8 million has been disbursed by STSPMF since the start of 2022.